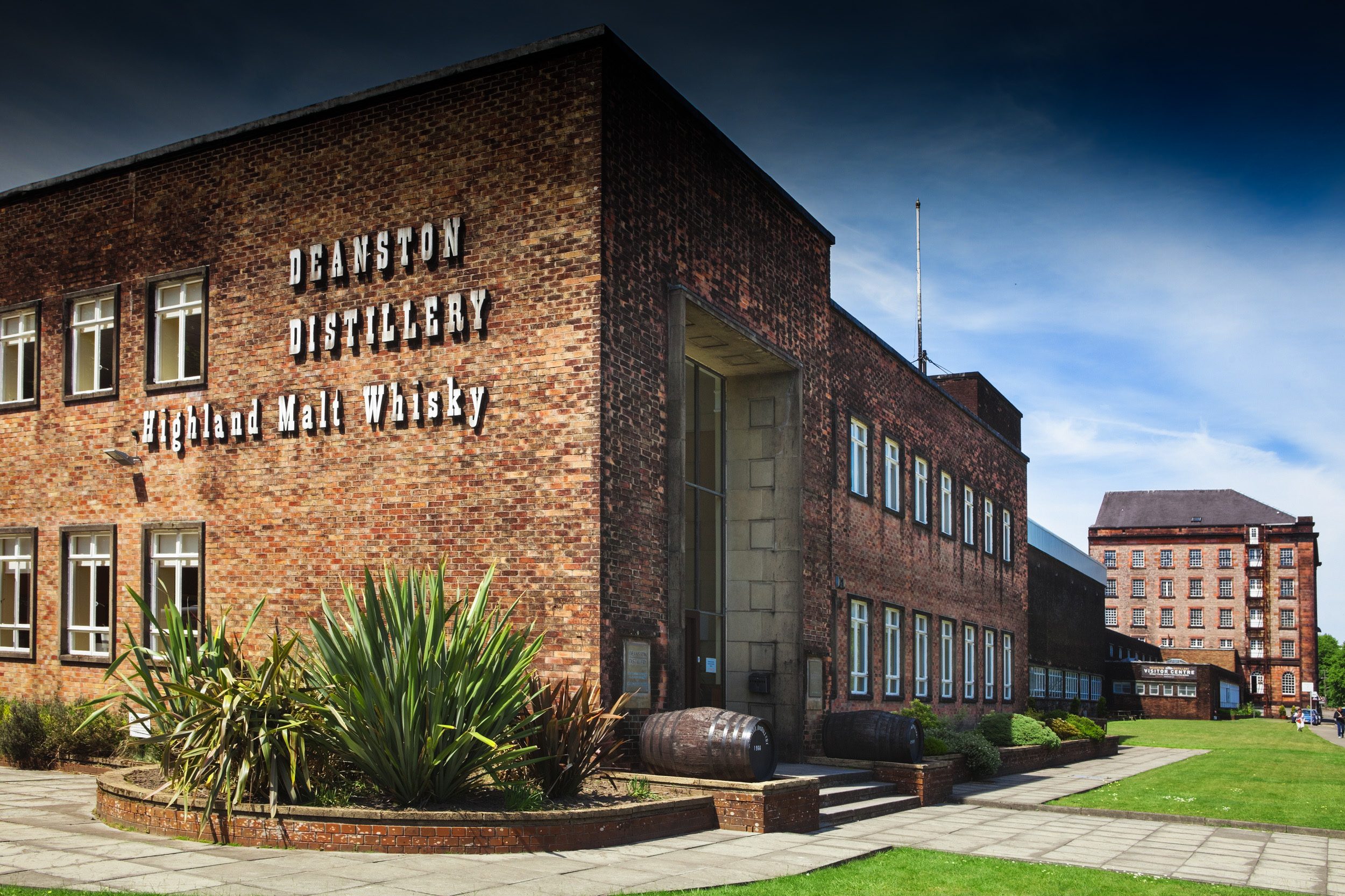 distilleries list
Annandale
Ardmore
Ardnahoe
Arran
Ben Nevis
BenRiach
Benrinnes
Bladnoch
Bunnahabhain
Caol Ila
Dailuaine
Dalmore
Deanston
Fettercairn
Glen Garioch
Glenrothes
Great Northern
Highland Park
Jura
Linkwood
Macallan
Port Dundas
Royal Brackla
Springbank
Talisker
Tamnavulin
Tobermory
Tomatin
Tormore
Tullibardine
Varela Hermanos
Close
Deanston Distillery has an abundance of history, but most of it has been in the guise of a cotton mill rather than a distillery. Built in 1785 on the banks of the River Teith near Stirling, it played a crucial role in the Industrial Revolution in Scotland. It houses the largest water wheel in Europe and it continued production until 1965 when years of decline led to the mill finally being shut.

Its location on the river bank meant that the former mill was an ideal candidate to be used for whisky production and Deanston Distillers Ltd was founded in 1966. The refurbishment cost £300,000 and took nine months, adding in four copper stills and a tun room.

It was opened in January 1967 by TV actor Andrew Cruikshank and its first single malt was released in 1971, known as Old Bannockburn.

Water drawn from the River Teith on which the distillery sits was tested and considered ‘perfect’ for malt production. The water passes through granite and peat beds in the Trossachs before flowing into the Teith, which is regarded as one of the purest rivers in
Scotland.

Known for its light, nutty, malty flavour, their new make spirit is quite waxy in style. This has allowed the distillery to play with finishes in recent years, including Port, Pedro Ximenez, Muscat and even Pinot Noir and Bordeaux wine finishes.

Providing not only the perfect water to create Whisky from, the River Teith which Deanston sits upon also provides 100% of the distillery’s electricity. Processing 20 million litres of water an hour through the on-site hydro-turbine and steam electricity generating plant, Deanston produces enough electricity to fully power all its operations and offices, selling the remaining 75% of unused electricity back to the National Grid!

Deanston Distillery was mothballed in 1982, but brought back to life again in 1990 with new owners and has gone from strength to strength since, opening a visitor centre in 2012 and featuring in Ken Loach’s film The Angels’ Share.

Committed to using only locally sourced organic Barley in the production of their Whisky, Deanston is one of only a few alcoholic brands to be recognised by the Organic Food Federation.

Distilled at Deanston
1999 Hogshead
Find out more
GET IN TOUCH
Whether you have a question about our casks, services, or require specific assistance from
one of our investment experts, we'd love to hear from you.